I have a new animal at the top of my favourite list.  Llamas.  They were at the bottom of my favourites list before last week.  One scared the dickens out of me when I was a small child by snatching the ice cream cone out of my hand. That was nearly 40 years ago, and it left a such an impression on me that I haven't gone near them since. I thought they were rude and unpredictable, but have since learned that it was more than likely the poor animal's situation that made him like that. I'm not a big fan of travelling petting zoos. Visiting animals at a happy farm is a much different experience than visiting them under the very stressful circumstances that travel and crowds put them under.

These llamas are lucky enough to not only have more than enough space, but also they are cared for by an exceptional farmer who loves them, understands them and treats them as her family. When I heard there was a baby there, I invited myself over for a visit and was welcomed warmly not only by the lovely farmer, but also by all of her wonderful animals. I was taught to keep my hands behind my back and gently stick my nose out toward them, and sure enough, they responded by gently touching their nose to mine, and Bingo! Friends. Not one was rude, and there was absolutely no spitting, something llamas are infamous for.

I look forward to spending more time with these gorgeous creatures now that we've been properly introduced. I may even have the opportunity to photograph them in the Spring when they are groomed and getting ready to be sheared.  Did I mention this herd has won multiple awards for the quality of the fleece? 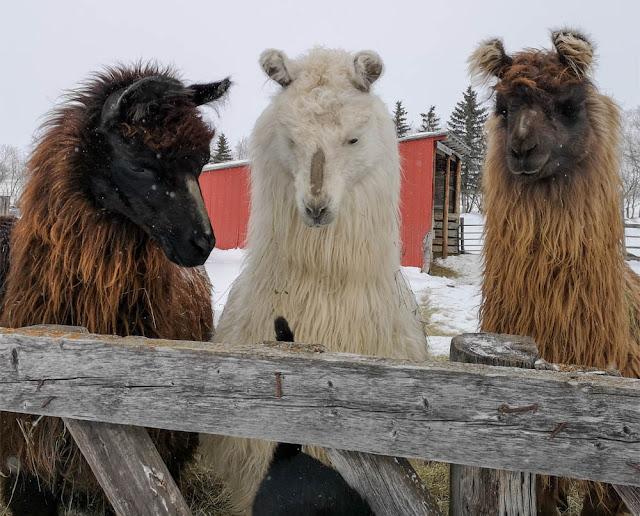 Posted by Andrea Ostapovitch at 9:08 AM 10 comments:

That Knitting I Was Talking About

I mentioned several posts (and months) ago that I had taken up knitting. I've made several items since then; dish cloths, toques, scarves. This one has been on the needles for more time than I'd care to admit. I didn't lost interest in knitting, but in TV and so here it sits. There have been no real road trips either, so without those two activities, it waits.  The yarn itself leaves quite a lot to be desired, but those colours are delicious, and not wanting to pay a fortune for great yarn, here we are. Oh, and warmer temperatures are on the way, so if I get this done before next winter, we may have a miracle on our hands.

I love pottery. Who doesn't? I received the lovely little yarn bowl for Christmas.  The artist is local and I think I may just have to start a collection of his work. 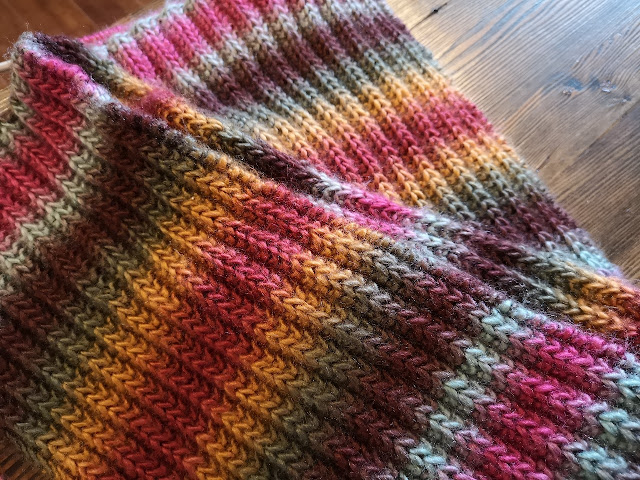 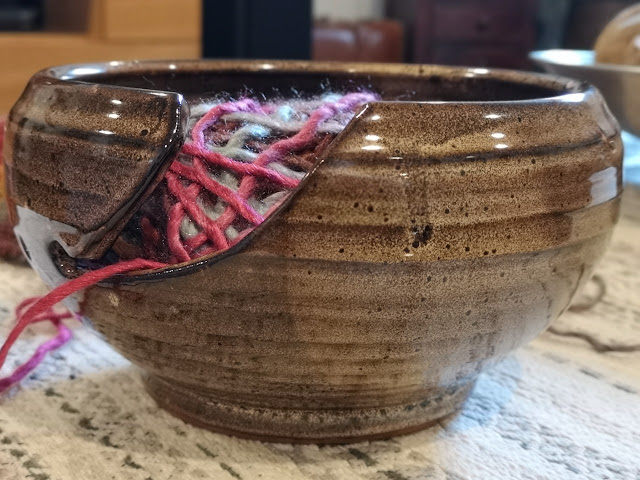 Posted by Andrea Ostapovitch at 8:44 AM 6 comments: