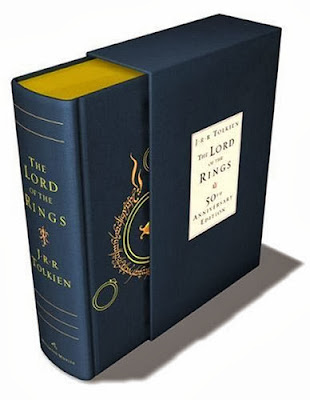 Although not every gift I received this year was Tolkien related, there was a definite theme.  This 50th anniversary edition of LOTR was definitely the highlight, but under the tree also was Thorin's Map, (yet to be framed), two Hobbit themed notebooks, and the least desirable, but really very funny Adventure slippers.  Yes, they are slippers in the form of Hobbit's feet, and they are dangerously big.  Manageable, but you'd better pay attention to every single step, especially on stairs.
My husband and I are also big "Firefly" fans, so naturally I now have a t-shirt that has a blazing "Shiny" written across the chest.  Continuing with the 'geek' theme, a "rock, paper, scissors, lizard, Spock" form-fitting t-shirt was also waiting to be tried on.  Everything was a great fit, and I promised to wear it all, (even in public) with exception of the Adventure slippers.  I really don't think they would hold up at all if I did decide to go on an adventure.
My son found me a great pair of much needed oven mitts.  My daughter rustled up a cute, little piggy whisk and 2 mini casserole dishes that I have already imagined a dozen uses for.
On my husband's side of the family, we drew names, and my sister-in-law adopted a polar bear for me.  Alongside that was some fantastic smelling Body Shop products, a weather station, (perfect for someone who is constantly going outside) and a 5 year, memory-a-day journal with a magnificent bejeweled pen.  I have registered my polar bear, and await a photograph.  I can still smell 'Satsuma' on my skin from yesterday's shower.  When it gets above minus 30 degrees, I'll think about setting up my weather station.  And, I seriously cannot wait for January 1st so that I can start a journal that only requires 1 sentence a day, a manageable task, I think.
For now though, before I start all the New Year's Resolutions, (which don't start until all the baking is gone) I'll curl up with a tray of goodies, a cup of tea, and my new book.  A good way to chew up time while the weather is so dangerously cold.
Posted by Andrea Ostapovitch at 6:19 AM 2 comments: 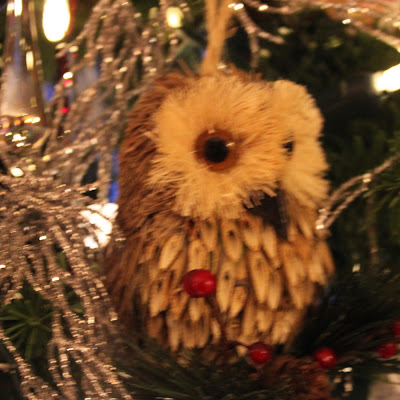 Another Christmas has come and gone.  The anticipation I felt leading up to it was fun but really only when I was observing what my children were experiencing.  As a child, I had nowhere near as much as my kids do now.  That’s what I tell them, that was what my Mother told me, and that was what my Grandmother told her.  I wonder if in upcoming years we would be terribly sad if we could no longer put on a Christmas with all the gifts and foods we have come to expect.  We say every year that it is all too much, and that we need to cut back, but if we were forced to, I’m certain we would look back longingly on our years of plenty and feel a certain amount of sadness.
Okay enough of that, the best part of the season was being together with everyone and although there were a few disappointments with the gifts given, most were received with surprise and followed up with joy.  The most difficult part of the season was when I put an ornament on the tree that holds a picture of my dear cat Junior that passed away this November.  His death wrapped up an era of my life, being that he was the last of my marriage’s first three pets.
On the up side, this was the first time in years that I didn’t have a clue as to what was under the tree for me.  I have been a notorious snoop all my life.  When we were children, my sisters relied on me completely to inform them of what they would be receiving that year.  It got to the point where my Mother could not trust me at all and she decided to have a little fun.  She hid all the gifts in the trunk of her car, locked it and then hid the keys.  She took it one step further and set up some bags in the veranda with some second hand clothes straight out of the sixties.   I was quite upset when I first found them, but as Christmas drew nearer, I overheard Mom say several times that it was going to be a tight year, and that we would all have to be very understanding.  Little did I know it was all part of the ploy.  By Christmas Eve, I had resolved to give my wardrobe a complete makeover and make these clothes work.  I really had no idea what I was going to with the plaid bell bottoms, but I was determined to make my Mom feel  loved.
I can’t tell you how surprised and overjoyed I was that Christmas when not only did I receive modern, stylish clothes, but also a Sony Walkman and my favorite album on cassette.  It was the best Christmas, and the look on my Mom’s face was one of both triumph and joy.
Now, you would think that experience would have changed me from Miss Snoopy Pants into a person who enjoyed the anticipation and respectfully never snooped again.  However, I inexplicably became worse.  I stopped at nothing to find out what gifts were in store for me.  I’ve dug through garbage to find receipts.  I’ve unwrapped and very carefully rewrapped gifts.  I’ve dug through underwear drawers, found those damn keys after hours of searching and dug through the packages in the trunk of the car. I learned how to act surprised and pleased and have even been able to move myself to tears in the act.  I’m a terrible person, I know.   I’m 37 years old, and this was the first year I was able to stop myself, thereby allowing the anticipation to build.  I wish I could say without a doubt that I am reformed, but only time will reveal that.
Posted by Andrea Ostapovitch at 5:12 PM 1 comment:

The End of An Era 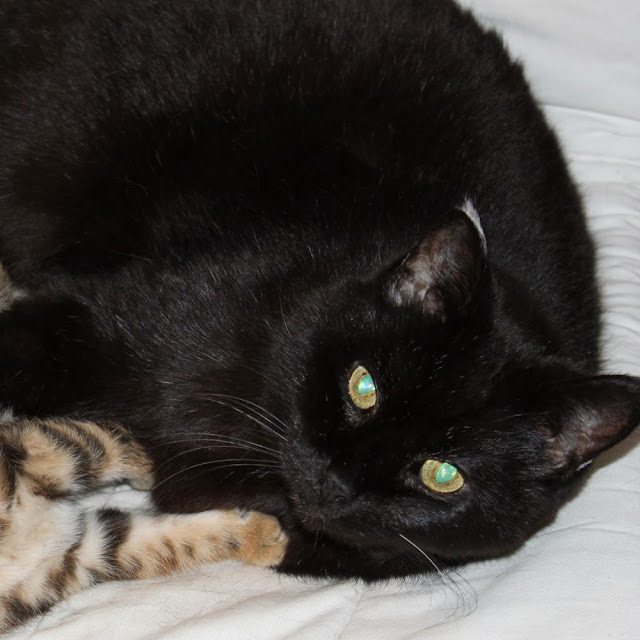 It is very hard to believe that nearly 2 weeks has gone by since I lost my best fur friend, Junior.  A cat of 20 years, 17 of which belonged to me.
When I went to the Saskatoon SPCA 17 years ago to adopt a kitten, I walked out instead with a 3 year old cat that everyone there could only describe as 'special'.  That particular shelter never kept animals for more than 3 months, and if by then they were not adopted out, euthanasia made room for the constant inflow of animals in need of a home.  But for Winnie, (his name at the time) they felt they needed to wait, and made an exception.  They even had him in a special display cage at the front desk so he could meet and greet everyone.
It wasn't long before I had him moved into my little apartment and had renamed him Zeke Jr.. I named him after the black cat I was given when I was born and whom I had until I was 17 years old.
My new cats' name was quickly shortened to Junior, and although it seemed very natural to me, whenever I introduced him to someone over the next 17 years, they would get a chuckle out of that name.  It didn't occur to me that when talking about 'Junior', people are usually referring to their biological son.
Junior and I lived happily in Saskatoon for a time, and I enjoyed walking him around the city on a leash or carrying him 'koala bear' style on my hip.  He made an excellent companion, and either people were super friendly and wanted to be introduced to him, or they thought I was some nutjob, and kept their distance.  Either way, it was a win-win for me.
I moved back in with my parents on the farm for a short time before moving to Rainbow Lake, AB where my fiancé lived.  We were married shortly after, and Junior became 'our' cat.  He was even in the wedding photos, and has been a part of every milestone in our lives thus far.
He had no trouble adjusting to all our moves, which we did several times within Rainbow Lake, and then after 5 years up North, we came back to civilization and lived in Lloydminster for 5 years.  This is where we had our two babies, another big change that did not upset this cat in the slightest.
His personality could be summed up in two words, calm and friendly.  I have no doubt that is why he lived to be a healthy 20 year old cat.  If cats are naturally Zen creatures, Junior was a Master.
We moved again, to Cold Lake, AB this time.  This is when Junior became, uncharacteristically adventurous.  He would sneak outside, (always with one of the kids) and worse, he would leave the yard.  I would have to go searching for him in neighbors yards.  I usually found him grazing on some grass, and he always willingly came to me.  When I would find him, he'd look at me as if to say, "Oh, hi.  You're out for a stroll too?".  I even once had to bail him out of jail.  Someone had called animal control, and Junior was impounded.  It cost me $50 to get him back, but I was so grateful he was safe.  After that, I had to have a serious talk with my two young children about keeping an eye on Junior, and not letting him escape the house.
Our last move took us back to our home town in SK.  Again, he had no problem making the move, and adjusted quickly.  Everyone who met him could not believe he was an 18 year old cat.  His health was perfect, his fur was soft and shiny, and he was very active.
He kept all his dignities until his very last day, and when his kidney disease got the better of him, I chose to help him go gently into the next life.
I haven't adjusted to his absence.  When the house is quiet, everywhere I look, I can clearly picture him either sleeping in one of his many favourite places, or walking up to me to be picked up or cuddle up next to me.  He was a people cat.  He was my cat, my companion, my friend, and the world doesn't seem quite as friendly a place without him.
Posted by Andrea Ostapovitch at 7:40 PM 2 comments: