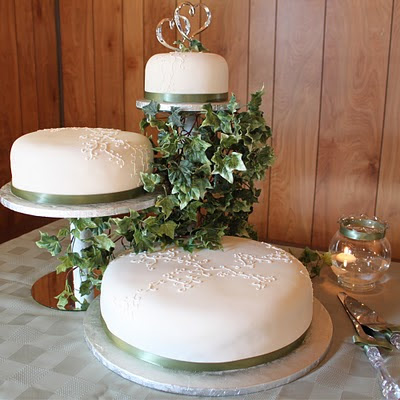 Here is a cake that I stressed over for nearly 6 months. I didn't how I was I going to make it, where I was going to make it or how I was going to get it to Manitoba, (a 10 hour) drive from where I live. In the end, it all came together quite nicely and with relatively little fuss. Six months of stress for nothing.
I baked and decorated the cake at my in-laws, which shortened the end drive with the cake in tow to only 2 hours. Of course I was still concerned about the heat wave we were experiencing. The bottom cake is chocolate with chocolate buttercream, while the middle tier is vanilla. The top is styrofoam, and the my sister's keepsake. Believe it or not, it was the little styrofoam 'cake' that gave me the most grief. In order to adhere the fondant to the foam, I coated it in a thin layer of corn syrup. So when it started to heat up and melt, it had no where to go but down, and that created the dark spot you see on the ribbon. I fixed it before the reception, but it just kept melting, and I seemed to be the only person to notice, so it was fine.
My sister was brought to tears upon seeing her cake, and even though it was nowhere near what she had pictured, she loved it, and I got the hug of a lifetime. Not one of those "Oh, that's nice" hugs, but one of those, "I think my left lung just deflated, but boy I feel loved" hugs. So, it was all entirely worth it - 6 months of stress, hours of baking, decorating and setting up, for that 2 second look of astonishment, 10 second look of admiration, and the hug that I still haven't completely recovered from.
Congratulations, Little Sister, and thank-you for letting me play such a large part in one of the most monumental days of your life.
Posted by Andrea Ostapovitch at 12:46 PM