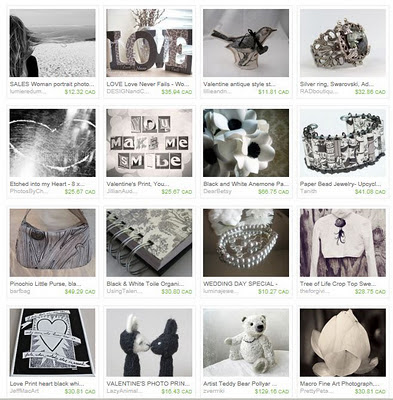 When my day seems dreary, with rain soon to follow.
When the pit of my stomach feels lonely and hollow.
When the plans I have made, seem to turn against me.
Your strong loving arms are a safe place to be.
You let me snuggle, all toasty and warm.
You build me a haven away from life's storm.
Author Unknown
I put together this little collection in honour of a relationship I could not live without.
Do you have someone wonderful in your life?  Someone you thank your lucky stars for everyday?  I am one of those fortunate people.
For all the cards, the letters, the dates we've been on, the kisses, the flowers, the hugs, the gifts, the road trips, our home, our family, and for all the promises of a future we have yet to share - Thank-you.
Posted by Andrea Ostapovitch at 7:09 PM 2 comments: 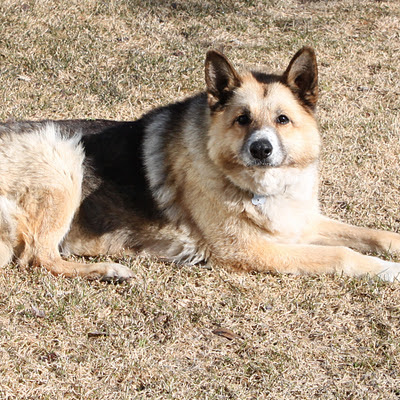 Our beautiful German Shepard, Husky cross passed away just before New Year's.  Ginger was 14 years old, and was, everyone agreed, the best dog anyone could ask for.
While living in Rainbow Lake, before we had children, we had two cats when this adorable little pup came onto our radar.  Neither of could refuse, and for the next year or so, I spent a great deal of my time learning how to train, and training my dog.  It paid off.  She was extremely well behaved, and while remaining instinctive about people, treated everyone with due respect.  She travelled with us, camped with us, slept under our feet during movies, went for long walks, and generally impressed anyone we met.  I especially loved combing her fur, playing frisbee with her, and kissing the wee black spots on her white muzzle.
A few years after we adopted Ginger, we moved to a very busy corner in the city of Lloydminster, and decided it would be best if she went to live on the family farm in Theodore.  She quickly took to everyone there and became the farm dog.  The only time she caused any difficulty was during thunder storms.  She would scratch at the doors, and left a many a reminder on the paint of my in-laws home, to let everyone know that a storm was coming and she needed to be tied to her dog house.  If not, she was known to bolt in the opposite direction, and last year, even went missing for a good 2 weeks.  We thought that was the last we had seen of her, because her health was not great, with arthritis taking it's toll on her hind quarters.  But my in-laws, loving her as much as they did, called everyone, and used every resource available to them.  This included long drives in the country, many phone calls, and when a local pilot heard about the search for our beloved Ginger, he took to the sky and did his part.  Eventually, she turned up on a farm of a single, elderly lady, and was very happy to be returned home.
She was a very loyal dog, and although the farm and it's people were her home, my father-in-law remarked on more than one occasion, that he never saw that dog happier than when Todd, I and the kids pulled into the yard.  As each child was born, she instinctively took to being protective over them.  At one point, even growling at our Uncle Mike, who lives on the yard with her when he reached into the car seat to take a peek at the newborn.  Being trained well, it only took a simple, "It's OK Ginger." to calm her completely.  Once the kids started walking and exploring the large yard, she stuck by there side and kept a close eye on them.
This last year was very hard on poor Old Ging, and everyone who had to watch her decline.  It got to the point where standing and walking took all her effort and drained her of energy.  I choose to remember her as the frisbee catching champ that she was, and her memory will carry on in our hearts and in the next dog that we adopt.  She has set a precedent, and I know what to look for in our next pup.  Hopefully, I will be introducing you to yet another family member early this Spring.
Thank-you to everyone who loved and took care of our dog.  Fred and Diana for accepting her easily and treating her like one of the family.  Auntie Vera for always having a treat ready for her.  Uncle Mike for his constant kind words whenever he passed her in the yard.  And Loretta for all the time you spent grooming her.  Ginger, you will be sorely missed by all.
Posted by Andrea Ostapovitch at 4:55 PM 1 comment: