Who knows what sort of bird this little guy was modeled after, but my husband called him "Frank the Finch', so there it is.  Frank came home with me one day, because he wouldn't stop whining about how lonely he was on that shelf.  I tried to reason with him, and explained that he had a huge family surrounding him.  He continued to complain saying that their beaks must have been attached improperly, because they couldn't chatter it up like he could.  All they could do was mumble inaudible sounds.
So, I let him hop into my cart, and he hasn't shut up since.  He even insists I take him on walks, which I refused to do for a long time, explaining that if my dog ever got hold of him, it would be his end. But he persisted, and so I eventually gave in, thinking to myself that if Bear did catch him, it might not be the worst thing.
He perched himself on my shoulder, and out we went.  I had my camera, I always have my camera, and why wasn't I surprised when Frank asked me to take his picture?  He spotted the perfect place on top of a fence post with a nice backdrop, so I indulged him.  And really, don't tell him this, his ego is big enough, but wouldn't this photo make the most adorable Christmas card?

It hardly shows the fence I was beside when Frank hopped off my shoulder and onto one of the larger posts, but I am sharing this with Good Fences over at The Run "A" Round Ranch Report.

Have a Merry Christmas Everyone! 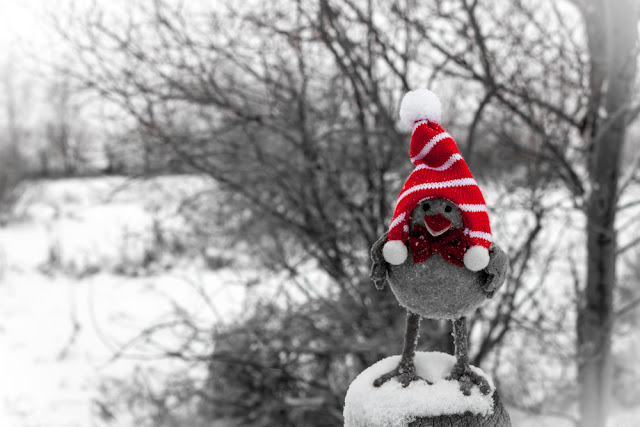 Posted by Andrea Ostapovitch at 6:54 AM