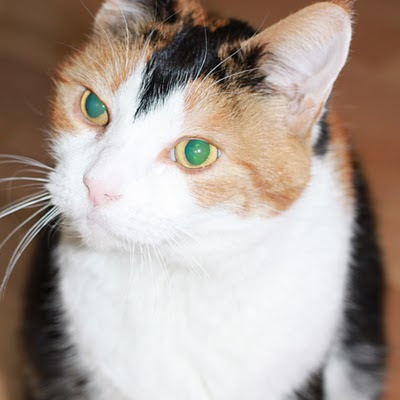 A calico with multiple personalities and a criticizing stare, Sarah is my cat, or she was up until fairly recently, when she suddenly turned into an animal I barely recognized.

She has never been an easy animal to take care of, or even to love for that matter. She's always had her own set of problems and attitudes, and she has never been too shy to let us know about them.

It all started when my Husband and I had to stop in at the local pet shop for a few supplies. Here was this very large cage with this very small kitten huddled up in a corner, and she watched our every move. She was the last of her litter that was brought in only a few days before. Sensing her dejection, we decided to take her home and give our only cat a sister.

At the time, I had been missing a quirky friend of mine from college, and decided very easily that this would be my new, little friend's name. Once home, it took Sarah a bit of effort to work her way into the heart of my other cat, Junior, (an entirely different and worthwhile story). It proved to be a difficult task, but it seemed there was nothing more important to her. She tried to cuddle with him and got kicked away. She tried to eat with him and was swatted. She tried interrupting up his bath to steel some of those licks for herself and received a gentle nip, getting her to back off. But she never went far, and her persistence paid off. Junior gave up, and suddenly decided that she was to be adopted and fiercely loved. They were now inseparable and until this day, and everyday, can be found curled up like yin and yang on their favourite chair.

But Junior is the only one in the household she would snuggle with. If you tried to pick her up, she would quickly squirm her way down. For the longest time, she would not even jump up and sit on your lap . If company came over, there was no sight of her. Close friends didn't even know we had a second cat. After a few years, we moved, and Sarah became manic depressive. One minute she was uncharacteristically sitting and purring on your lap, and the next she was licking herself until she bled. We had her on kitty prozac for a time and once she settled down, we weaned her off, and all seemed well. She even became very friendly, but only on her terms. Under no circumstance were we allowed to pick her up and put her on our lap. If she decided to snuggle with you though, there was no choice. She persisted no matter how bad her timing was, until we relented.

This past Christmas, as with all holidays, we kenneled the cats while we travelled to visit our families. When we picked them up shortly before New Years, we were troubled at the amount of weight Sarah had lost. It looked like she had simply refused to eat the entire time we were away. After awhile of trying to get her to put the weight back on, we decided to take her to the vet to make sure there was nothing more sinister than a bad attitude going on. After some tests, the doctor said she seemed fine. Really, other than her being so thin, she seemed normal to us as well. But then she decided to start playing a new game with us . Her eating habits suddenly changed completely. When there is a ham or chicken in the oven, she refuses to eat at all. She will just sit in the kitchen and look at me. If I leave the kitchen, she follows, all the while staring me down until I make eye contact with her, and then she meows at me. Well, it's less of a meow and more like the sound a magpie makes, not at all pleasant. When I head back to the kitchen, she follows. If I open the fridge, she sticks her head in, and when I offer her the can of cat food, she shows interest, only to turn her nose up at it once I have it in the bowl. The next day, when there are no savoury aromas filling the air, she will happily finish an entire can in a day. At least, this is the pattern I've noticed recently. I'm sure she will change her mind tomorrow.

I suppose, given her 12 year history with us, I shouldn't be all that suprised by these sudden changes. If anything, I should learn to expect them. We are moving again this summer, and are planning to have some of that kittly prozac on hand. Maybe she'll surprise us yet again, and handle it all with grace and ease. So far, something this cat has not displayed is grace and ease. We can only hope.

Posted by Andrea Ostapovitch at 1:33 PM